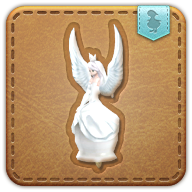 Summon your tinker's bell minion. Said to be named for a pixie...unless you ask the pixies, who adamantly deny that any of their kind would ever have borne such a ludicrous name.

Discovered fallen off the monstrous Archaeotania by an Ondo youth, this enigmatic instrument, half-bell and half-maiden, is believed to be either an adornment from ancient times or a recreation thereof. Upon it is inscribed an enchantment that amplifies magical power.

Learn more about this minion on Apkallu Falls: Tinker's Bell