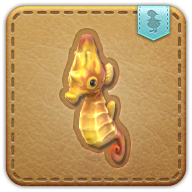 Summon your tiny tatsunoko minion. If the Hingan word for sea horse is tatsunoko, would that make this a sea pony? Your little sea pony?

A single ilm to the right or left and this cute creature would have been kebab. Fate, however, intervened, and now the wavekin follows its would-be transfixer─the tiny tyke having taken quite well to the upper world's drier climes.

Learn more about this minion on Apkallu Falls: Tiny Tatsunoko