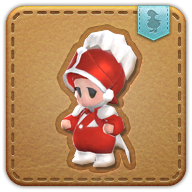 Summon your magic wind-up onion knight minion. An accurate representation of the soldiers who once made up the greater portion of the Allagan Imperial Army.

If Sons of Saint Coinach anthropogeographer Rammbroes is to be believed, towards the end of their civilization, the Allagans began using automata such as this to fight their wars (which had been deemed inhumane, yet ultimately necessary to spread imperial peace).