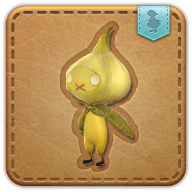 Summon your Garlic Jester minion. Every breath you take will act as a reminder that your pungent pal is right behind you.

The son of a traveling mummer who performed under the name Garlic Star, the jester swore he would never follow in the footsteps of his father. However, after being deemed too malodorous to serve in the royal guard, he swallowed his pride and fell back on the only trade he knew.

Learn more about this minion on Apkallu Falls: Garlic Jester