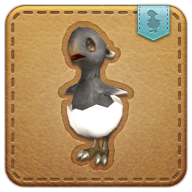 Summon your black chocobo chick minion. Rumors about her being able to fly are completely unfounded...or are they?

This poor chocobo chick was as yellow as an ear of millioncorn before one day being doused in black ink by a random passerby bedecked in silver accessories. Try as the chocobokeeps might, none were able to remove the taint, and thus the realm's first black chocobo was born.