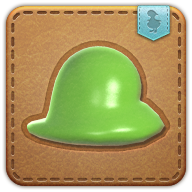 Summon your slime puddle minion. Fun for the whole family.

Once stepped upon, slime can be nigh on impossible to remove from the soles of boots, making the shapeless creatures a nuisance to those who mine the mountains in which slimes reside. The Encyclopedia Eorzea recommends a squeeze of sun lemon to loosen their stony grip.

Learn more about this minion on Apkallu Falls: Slime Puddle