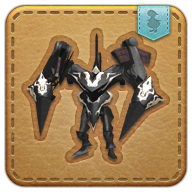 Part of the Guildmaster Series, this high-quality replica is so exact in its rendition of the vanguard's build that Garlemald has banned the item's import into the Empire's outlying provinces, for fear the data gleaned from it will be used by rebel forces still active in these lands.

Learn more about this minion on Apkallu Falls: Model Vanguard