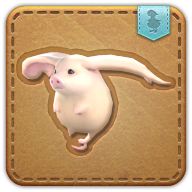 Summon your bacon bits minion. Tastes like bacon...if bacon and clay taste the same to you.

After seeing a dream wherein they were being followed by a flying pig, a retainer out gathering absent-mindedly worked some clay into the creature's likeness. To their surprise, the creature suddenly sprang to life─ most likely at the hands of a pixie bent on mischief.

Learn more about this minion on Apkallu Falls: Bacon Bits