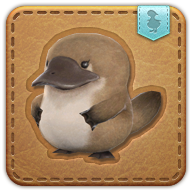 Summon your bitty duckbill minion. Do not attempt to put on your feet.

Named for its duck-like bill, this creature hunts not by sight or smell, but rather by sensing the aetheric discharge from prey. It can also deliver a potent venom from the spurs on its hindfeet, causing great pain if not death─ a sobering contrast to its adorable appearance.

Learn more about this minion on Apkallu Falls: Bitty Duckbill