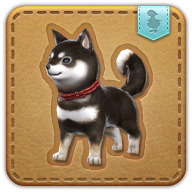 Summon your black hayate minion. Gaze upon the visage of a ruthless killer.

Despite their endearing appearance, black hayate are oft employed as guard and sheep dogs, as they react to threats with shocking ferocity. It was for this reason that the breed was named after a piece of lethal weaponry from its eastern homeland, now lost to the Flood.

Learn more about this minion on Apkallu Falls: Black Hayate