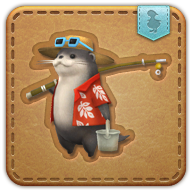 Summon your abroader otter minion. Hobbies include playing and having fun on an island in the sun.

Legend tells of a right mad otter who, dissatisfied with the fare of his home waters, bought a ship and made south for more bountiful seas. There, he ate like a king...until his boat sank in a storm, leaving the slippery pup alone on stranger tides.

Learn more about this minion on Apkallu Falls: Abroader Otter