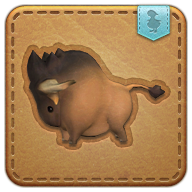 Summon your buffalo calf minion. Milk-fed until tender and juicy. Not that anyone would ever think of eating him.

When the Scions of the Seventh Dawn began clearing out the Waking Sands in preparation for the move to Revenant's Toll, this wide-eyed calf was discovered hiding in a disused linen closet. Though an inquiry was made by the Antecedent herself, it is still not known who was keeping the beast.

Learn more about this minion on Apkallu Falls: Buffalo Calf