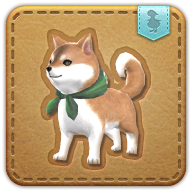 An unscrupulous merchant passed this pup off as a rare species of miniature dog known as the mameshiba. Such a thing does not exist. Rather than have the hapless owners discover the deception when it grows, it was trained to run away.

Learn more about this minion on Apkallu Falls: Mameshiba