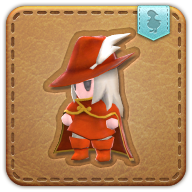 Summon your wind-up red mage minion. He'd rather be red than dead.

Tales of mages dabbling in the schools of both black and white abound, but most end in the adept realizing that she should have focused on a single art rather than allowing hubris to drive her to believe that she might excel in both.