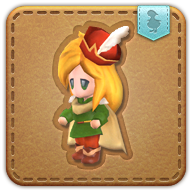 Summon your spoony bard minion. Although there are many different accounts of what was actually said during the famous altercation, all agree on the single utterance that became his legacy.

This colorfully outfitted automaton was crafted to resemble the legendary Edward Chris von Muir. The proud descendant of a peerless bard, it was said Edward's voice could unravel the very fabric of magic. The prince of a lost kingdom, he stood against darkness in the name of love.

Learn more about this minion on Apkallu Falls: Spoony Bard