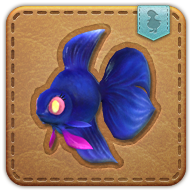 Summon your assassin fry minion. There was an old betta who swallowed a fry. No one knows why it swallowed the fry, but for some reason, the fry can now fly.

After several turns of the sun sloshing about in the depths of a ninja betta's belly, this freshly hatched fry has given up swimming altogether and taken to the skies. How spending time in a belly can inspire a fish to flight is something only one who has spent time in a belly can know.

Learn more about this minion on Apkallu Falls: Assassin Fry