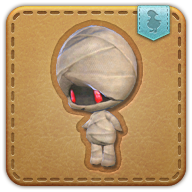 Summon your mummy's little mummy minion. While as cute as a button, remember, mummies are ultimately embalmed corpses damned to eternal thralldom in the land of the living. Have fun.

It is believed that the ancient technique of mummification─which involved embalming, organ removal, wrapping, and the burial in a multilayered sarcophagus─was an expensive undertaking. That it was performed on a child can attest to his parents' devotion.