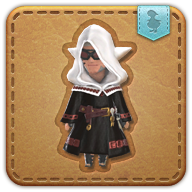 Summon your wind-up Urianger minion. When the senary moon did wane, there sounded a garrulous and convoluted monologue. A new minion had roused, one whose identity lieth within our ken.

After commissioning several other wind-up Archons, the Scions of the Seventh Dawn coinkeeper realized that she had almost enough gil to order a seventh... almost. And so the robed and hooded Urianger was crafted without hair or other anatomical features to keep the cost down.

Learn more about this minion on Apkallu Falls: Wind-up Urianger